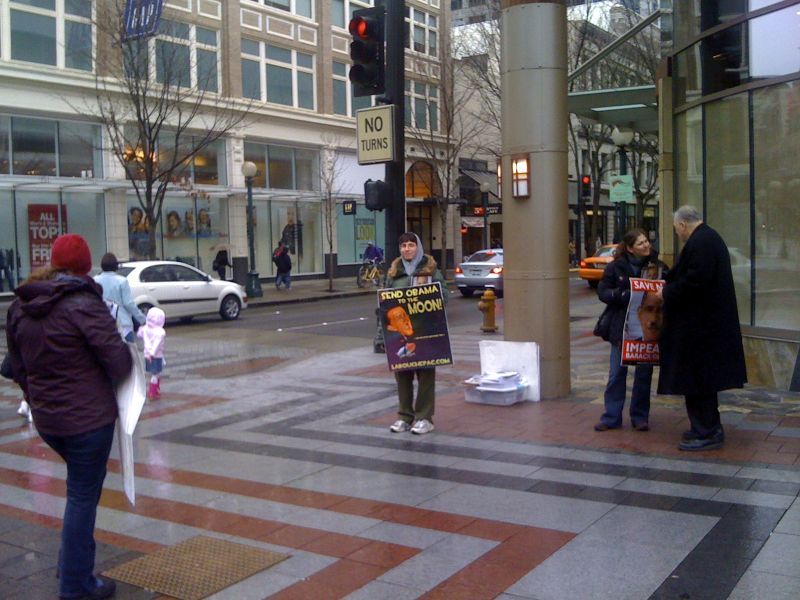 We were in Seattle for the weekend and the crazy people with the Hitler-mustache-on-Obama posters were still there! I was really surprised when I saw them there last summer, but this time I just started laughing. I thought briefly about arguing with them, but had no idea where to even start. The idea that health care reform is something Hitler would do is just too wacky. Then I considered suggesting they do a poster of Joe Biden in a Napoleon hat. I'm not sure what that would mean, but it seems like something they might like.

Politics is such a funny thing. People treat it like a sport where their team has to win, but the fundamental purpose of government is to provide a stable and healthy administrative system for society's common resources. Political rhetoric may sometimes seem like it's about making sensible decisions, but really it's just about the person who looks or acts most like us winning. Politicians should be boring and practical like scientists, but instead people want rock stars.

This is because people make most of their decisions for emotional reasons. Way back in history when people lived in small tribes, it was an effective system because everyone knew each other. These days, we don't even know many people in our own cities, much less some politician who lives on the other side of the country. When an election rolls around we choose between a couple politicians and all we have to go on is our impressions of their speeches. It's no wonder we go for the guy with good hair who was confidant during his speech. It's like electing the captain of the ship based on who has the best suit and tie. The ship might run aground on some rocks, but at least the captain was wearing a nice suit, right?

Anyone who wants to work in a profession such as electrician, engineer, scientist, and so on needs to go to school and take tests, but you could run a country even if you've dropped out of high school as long as you're an old white man who sounds like he knows what he's talking about. It's no wonder the average politician has a law degree and the personality of a used car salesman. It shouldn't be surprising some people get caught up in the game of politics, cheering for their team, booing the other team and forgetting that we really do need sensible, practical leadership.