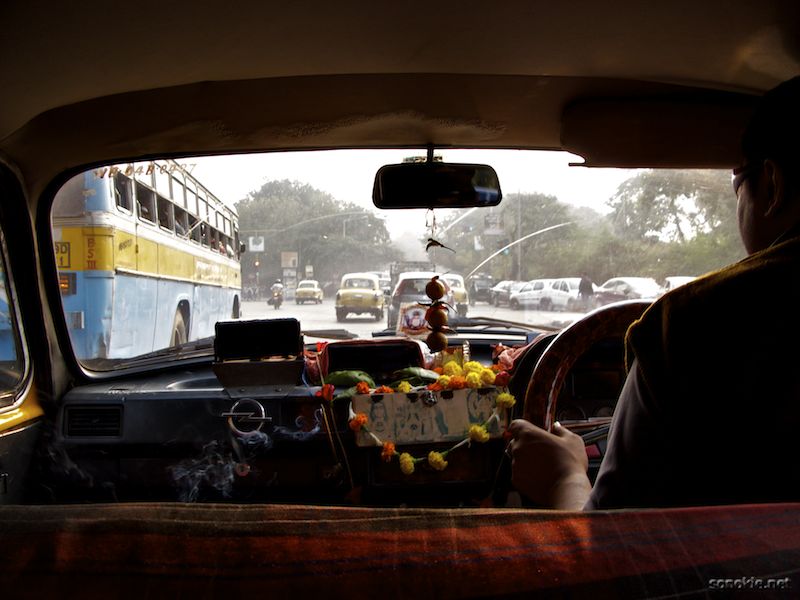 It's almost a rule that Indian taxi drivers must have some sort of deity on the dash. This trip we saw quite a few clear plastic deity figures lit by multi-coloured LEDs. I almost wanted to buy one, but it's a bit too cheesy for me. This taxi driver has the lime and chili strand on the mirror, marigold garland and incense (the waft of blue smoke), some pictures and maybe some other stuff too. It must be pretty tough dealing with the traffic in a busy city like Kolkata, so the drivers need all the help they can get.

Another rule taxi drivers have is to leave the plastic wrap on the meter so it stays in pristine condition, and if they accidentally do take the plastic off, they should be sure not to turn the meter on. No self-respecting Indian would be caught following rules like there was only one right way to live, so there was the odd driver who unwrapped the meter and turned it on, and even one or two who actually used it.

We rode in one taxi for 45min, and according to the meter I think we averaged about 7km/h (due to traffic). 45min might sound like a long time, but it's pretty much impossible to be bored in a taxi in India. The real problem was the exhaust from all the traffic. We had sore throats half-way through the trip and had coughs and felt sick the next day. I suspect taxi and rickshaw drivers have some serious lung damage. Breathing through my scarf felt like it helped, but clearly not enough.

This taxi driver had a pair of cool shades, which was unusual and when I complimented him on them, he said, "pollution". I could feel something in my eyes, but I was a lot more worried about my throat.